Take a look at some celebrity news and you will see that many of them are sporting what is now considered the latest in accessories – e-cigs. E-cigs and celebrities are vaping up the red carpet, and quite a few are becoming spokespersons for marketing different brands. Everyone from Leonardo DiCaprio to Katherine Heigel, Keith Richards and Dennis Quaid have all been caught using e-cigs. Caught isn’t the right word, they have been photographed using e cigarettes without apology. This has got many people making noise about how this is a bad example and will encourage use of e-cigs among children by “glamorizing” them.

How powerful are celebrity choices?

You can’t downplay the powerful influence that celebrity lifestyles have on people. They are hired as spokespeople for products because companies know this. The question is what message they are sending by using e-cigs. For one, the very positive message is that all of them are known smokers of combustibles. That they have made the switch is a powerful and positive example of a choice in harms reduction. While everyone loves the concept of smoking cessation and values it above all else; it isn’t all the successful for the majority of people who try. By using an e-cig to reduce the harm of smoking, a person can begin to feel better and do the work that has to come before quitting. What most people point to, however, is that by celebrities being shown using e-cigs they are promoting them to kids. 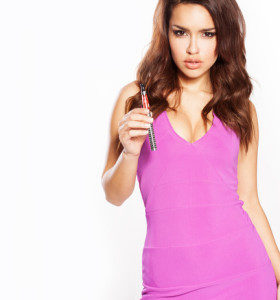 Do we give kids enough credit for thinking for themselves?

Kids do what the role models in their life do. It is really that simple. Where adults who are complaining about the image of celebrities smoking e-cigs miss is that kids also begin to learn the difference between what is a person, and what is a role very quickly. They know the difference between who someone is on stage and who they are in life and role models who are not accessible to a child are not as closely emulate as the ones that are. This is where the real problem starts when it comes to the argument about celebrities promoting smoking or e-cig use. It is the adults who tend to glorify the celebrity lifestyle, while it is the children who tend to glorify the roles and characters the celebrity plays. Showing a character in a movie smoking will lead to more children smoking, showing a shot of them on the set taking a break and smoking will encourage more adults to smoke.

The real problem with ecigs and celebrities

The real problem with e-cigs and celebrities is it puts the blame for children taking up the smoking habit, or any habit, on a celebrity and not on the parent. Study after study has shown that engaged parents who also monitor how a child socializes and with whom have a more profound effect on a child’s choices than anything else. Putting the blame on Katherine Heigel for someone taking up e-cig smoking is like crediting the Pope with a child wanting to take communion. Children copy what they see in their daily and real life. One thing that can be good about all these celebrities taking up e-cigs is that if a child doesn’t have a role model in real life, at least they are being shown that there are other choices in habits to make one appear an adult that are healthier than the standard rebellions.

In the same category